The people who grow ice

Known as the “Switzerland of America”, Ouray is a bustling outdoor recreation hub, particularly for ice climbing – on waterfalls created by a small team of “ice farmers”.

here was a rumour going around that a group of climbers was accessing the park illegally before opening day. Pete Davis, operations manager at the Ouray Ice Park in Colorado, set off to investigate. I followed him along the snow-packed edge of the Uncompahgre Gorge. Beneath us were cascading sheets of ice, frozen to the cliffside. The park wasn’t due to open for another three days, but everyone – climbers and staff alike – was anxious to get the season started.

The Ouray Ice Park sits at the mouth of a narrow box canyon sculpted by the Uncompahgre River. Here on the western edge of the Rocky Mountains in the south-west United States, the landscape pivots quickly from jagged alpine terrain to red rock plateau. Just below the park is Ouray, a historical mining town that’s now a bustling hub for outdoor recreation. It’s known as the “Switzerland of America”. 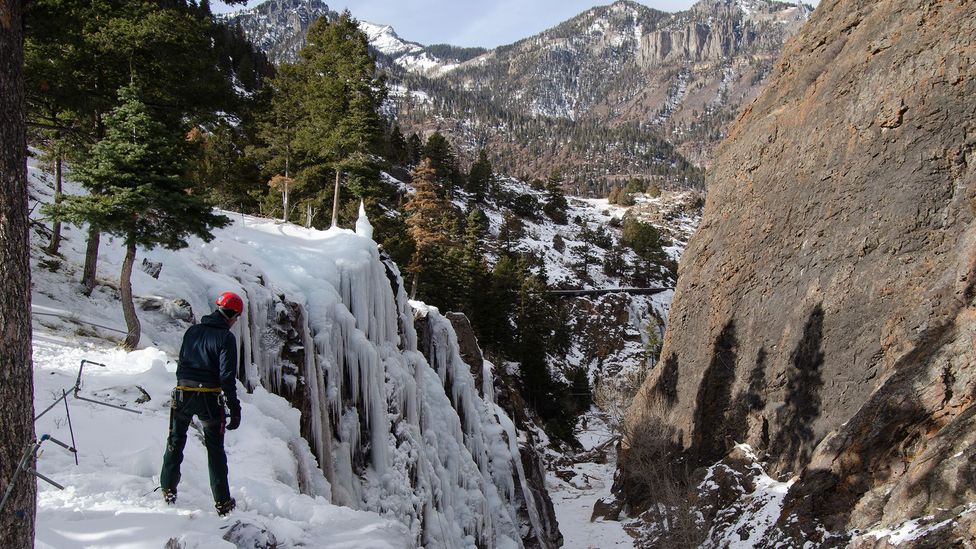 The Ouray Ice Park is nestled in the Rocky Mountains in the south-west United States, known as the “Switzerland of America” (Credit: Margaret Hedderman)

As we picked our way up the canyon, Davis used an ice axe to point out the various projects his staff were rushing to complete before opening day. There was signage to erect, a new bridge to inspect, and of course, lots of ice to grow. The waterfalls in the Ouray Ice Park are entirely manmade, created by a small team of “ice farmers”.

He showed me the lines of water pipes and sprinklers situated along the cliff edge. There are more than 200 of these sprinklers, which spray water directly onto the rock, creating walls of ice containing 100-plus climbs. Starting in November when the temperature drops, the ice farmers saturate the rock with water to cool it, essentially building a canvas for the waterfalls. They use existing features on the rock, like overhangs, to grow a variety of routes for all skill levels.

Though the job involves extensive manual labour in freezing weather, Davis described growing ice as a kind of art form. “Because it’s not really a natural phenomenon to have showerheads, you know, flowing on mountain ice climbs.” 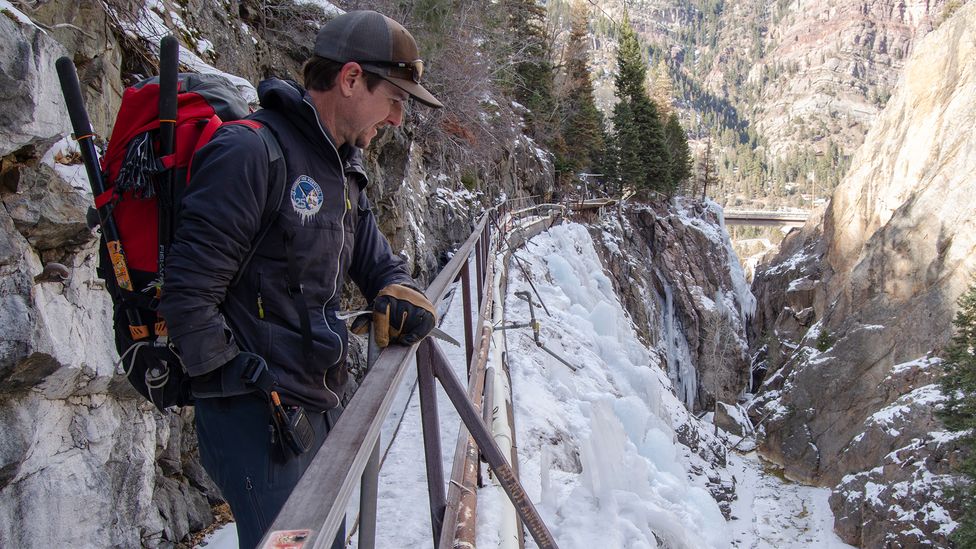 In the wild, climbable ice forms as either a frozen waterfall or as water seepingout of the rock. The park attempts to mimic both styles. Steve Imhoff, a second-year ice farmer, said their ultimate goal is to create routes that are challenging to both the mind and body by fine-tuning the valves and observing the water spray.

“You get up real early in the morning, and the first job is to turn the water off before everyone gets there,” Imhoff said. “You get this moment when you’re one-on-one with the ice park, just out there in your element.”

If half an ice farmer’s job is creation, the other half is maintenance and repair. Exposed water pipes in the mountains are prone to freeze and break. Last year, there was a 150ft section of piping suspended in trees that froze twice. They had to scramble into the branches to remove and repair sections, a process that took nearly four days.

You get this moment when you’re one-on-one with the ice park, just out there in your element – Steve Imhoff

Like most seasonal jobs, ice farming ends when the park closes, usually in March. Some of the farmers leave Ouray to pursue work in other states. Sarah Goodnow, a first-year ice farmer, works as a wildland firefighter, literally dividing her year into fire and ice. She said she’s attracted to manual labour in the outdoors, something both jobs offer plenty of.

“It just sort of happened,” Goodnow said. “Fire and the ice park happened to be the opportunities that presented themselves.”

Other farmers work as rope access technicians, providing support on wind turbines. Before taking a full-time position at the park, Davis spent his summers working as an archaeologist. 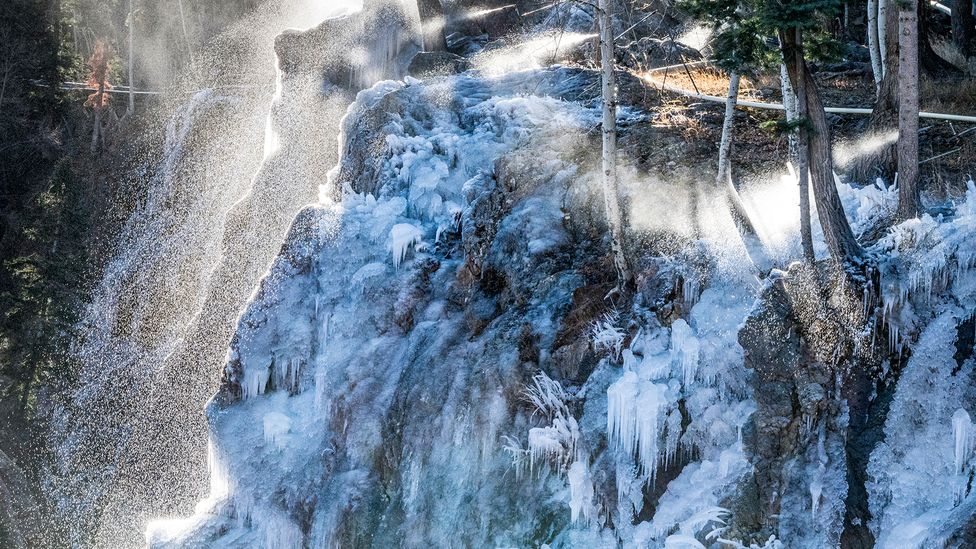 The park tries to mimic natural climbable ice forms, like a frozen waterfall or water seeping out of the rock (Credit: Xander Bianchi/Ouray Ice Park, Inc.)

When Davis and I reached the back of the one-mile-long park, there were no rogue climbers to be found. Either we missed them, or it was nothing but a rumour. With opening day quickly approaching, Davis was hyper-vigilant about preserving the ice. The weather certainly wasn’t doing him any favours. This winter has been unusually warm and temperatures, even in December, were not cold enough to make sufficient ice. It even rained a day before the park was set to open, destroying 30% of the ice farmers’ efforts.

“Winter climate is less certain due to the warming of our planet,” said Heidi Steltzer, Fort Lewis College professor of environment and sustainability and lead author of IPCC SROCC (the Special Report on Oceans and Cryosphere in a Changing Climate). “Human-made ice may not be possible every year, but in years when it is, [the ice park] offers joy, a gathering place and livelihoods to sustain rural mountain life that’s one part of the adaptation puzzle in our heated world.”

The gates did eventually open, and the park has been busier than ever. One morning, ice farmers arrived to find 155 people waiting to climb, something unheard of only a few years ago. In total, the park will likely see more than 20,000 visitors this season. Peter O’Neil, executive director of the Ouray Ice Park, attributes it to ice climbing’s soaring popularity as well as the gym-like nature of the park.

“The fact that it’s so accessible helps with the growth of the sport,” O’Neil said. “In my time, you had to hike or ski in for multiple hours.” 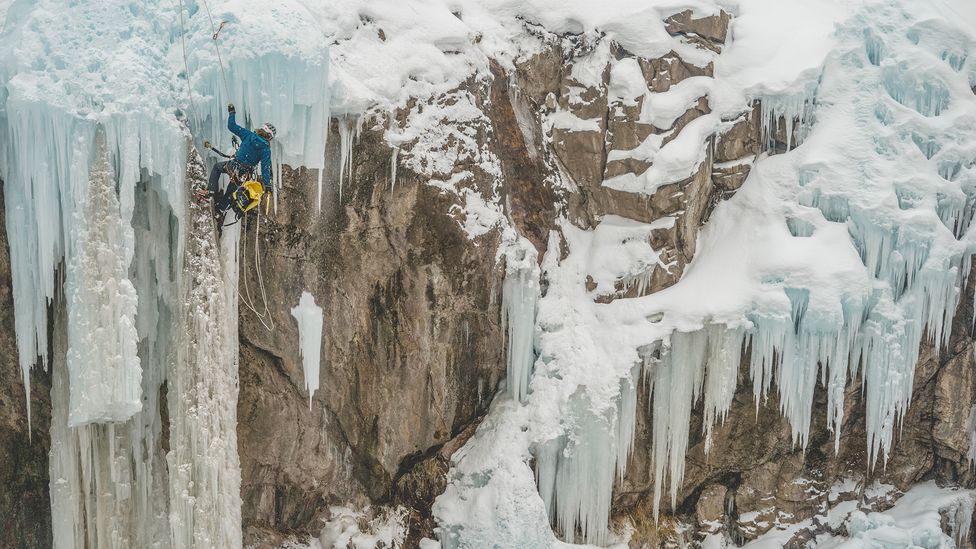 Elite climbers will train at the Ouray Ice Park before going on other high-altitude expeditions (Credit: Jacob Raab)

Ice climbing in Ouray has come a long way since its early days in the 1980s, when local adventurers discovered that leaks in the city’s hydroelectric pipes had created waterfalls near town in the Uncompahgre Gorge. Suitable to the town’s Old West roots, there are tales of outlaw climbers “accidentally” puncturing the pipeline with their ice axes to make more waterfalls.

Though legitimate ice farming began in the early ’90s, the park became an official non-profit in 1997. This year, it will host three major ice climbing events, including a festival for marginalised communities and an internationally sanctioned competition that will attract top athletes from around the world. Other elite climbers, many preparing for Himalayan and other high-altitude expeditions, come to here to train.

I returned to the park a few weeks later with a group of new ice climbers. We set up in a wide stretch of canyon, along with 20 or so other people. In front of us was 90ft of pale blue ice, shimmering down the wall. Now I could understand what the ice farmers meant when they referenced the different qualities of ice. There were big bulbous sections called “cauliflower”, that ice axes sink into with a satisfying thunk. Newer ice hung from cliffs like chandeliers. In other sections there was no ice at all, allowing climbers to use their axes and crampons to ascend the rock.

While I was on belay, wrapped in a warm puffy jacket, I noticed several of the park’s rangers making their rounds. This is a relatively new position, a result of the park’s growing popularity. Rangers welcome climbers, perform head counts and ensure everyone is staying safe. To prepare for opening day, they also helped install new trails, benches, and signage.

“Building things that will last makes me feel like I’m giving back,” said Ally Bloom, a ranger and former climbing guide.

You may also be interested in:
• Jungholz: A ski town stuck in the wrong nation
• The Walk of Peace: Europe’s Alps-to-Adriatic hiking trail
• Can Taiwan become Asia’s next great hiking destination?

Others love being a part of the action.

Tres Barbatelli described the power of seeing climbers experience “joy, fear and misery in the gorge”. For someone who has experienced those same emotions in the park, it’s particularly rewarding to see it reflected in others. “You see the look on their face and you’re like, ‘I know exactly how you’re feeling right now’,” he said. 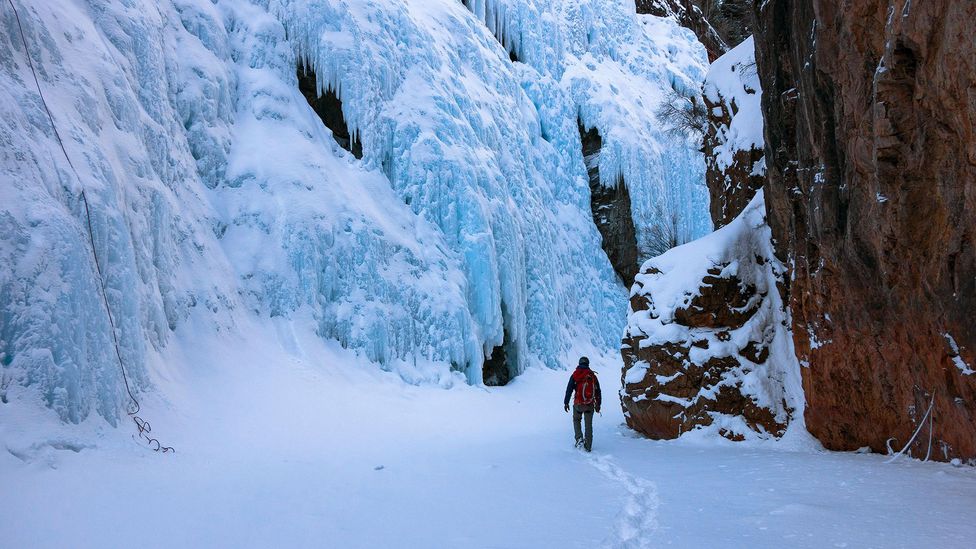 The ice park is likened to a ski resort, with a strong economic impact on Ouray (Credit: Rowan Romeyn/Alamy)

Ice climbing, which is often described in terms of its beautiful aesthetics, can certainly be an emotional experience. One of the women I climbed with broke into tears when she finished her first route. She never thought she’d be able to climb anything, let alone a towering wall of ice.

When at last the sun dipped beyond the distant mountains, cold air began to waft through the canyon. We headed into Ouray for dinner. The highway, which is the primary road through town, is lined with Victorian brick buildings. Climbers stomp past a small selection of restaurants and shops in their mountaineering boots and parkas. Not long ago, many of these local businesses closed for the season, awaiting the more lucrative summer months. It was so quiet, kids would sledge down Main Street.

The ice park’s impact on Ouray is often likened to a ski resort. Without it, there wouldn’t be much of a winter economy. I spoke with Lora Slawitschka, president of the Ouray Ice Park, Inc. Board of Directors. Her family owned a hotel in Ouray for 50 years. Slawitschka is no climber, but she joined the board because she understood the importance the park plays in the community.

“Without the ice farmers and the organisation that they bring to the park, it wouldn’t be the ice park it is today,” Slawitschka said. “They are truly the folks that make it happen.”

There are no comments for this doc yet.