The Qiy Scheme Standard provides a vendor-neutral, technology-agnostic, and industry-agnostic protocol for exchanging personal data under the control of the individual, enabling insight for continuous improvement.
▪ Provides the capabilities to individuals to obtain full, secure and private control of their personal data and the possibility to share their data of choice with people, companies and governments they are dealing with
▪ Provides prescriptive guidance on how to handle personal data under the Qiy Trust Principles
▪ Supports connected apps and applications interpreting data on the individuals side, for individuals eyes only
▪ Supports real-world use-cases driven by the Digital Economy (e.g. 1-on-1 connections with individuals, loyalty 4.0, subscription to customer data, one-click-payments)
▪ Is industry-independent to solve the same problems for everyone.
▪ Is designed for existing landscapes and accommodates future IT paradigms.

The Qiy Scheme Standard consists of a three-layer reference architecture. It uses protocol layering to simplify the designs by dividing them into functional layers, and assigning protocols to perform each layer’s task. 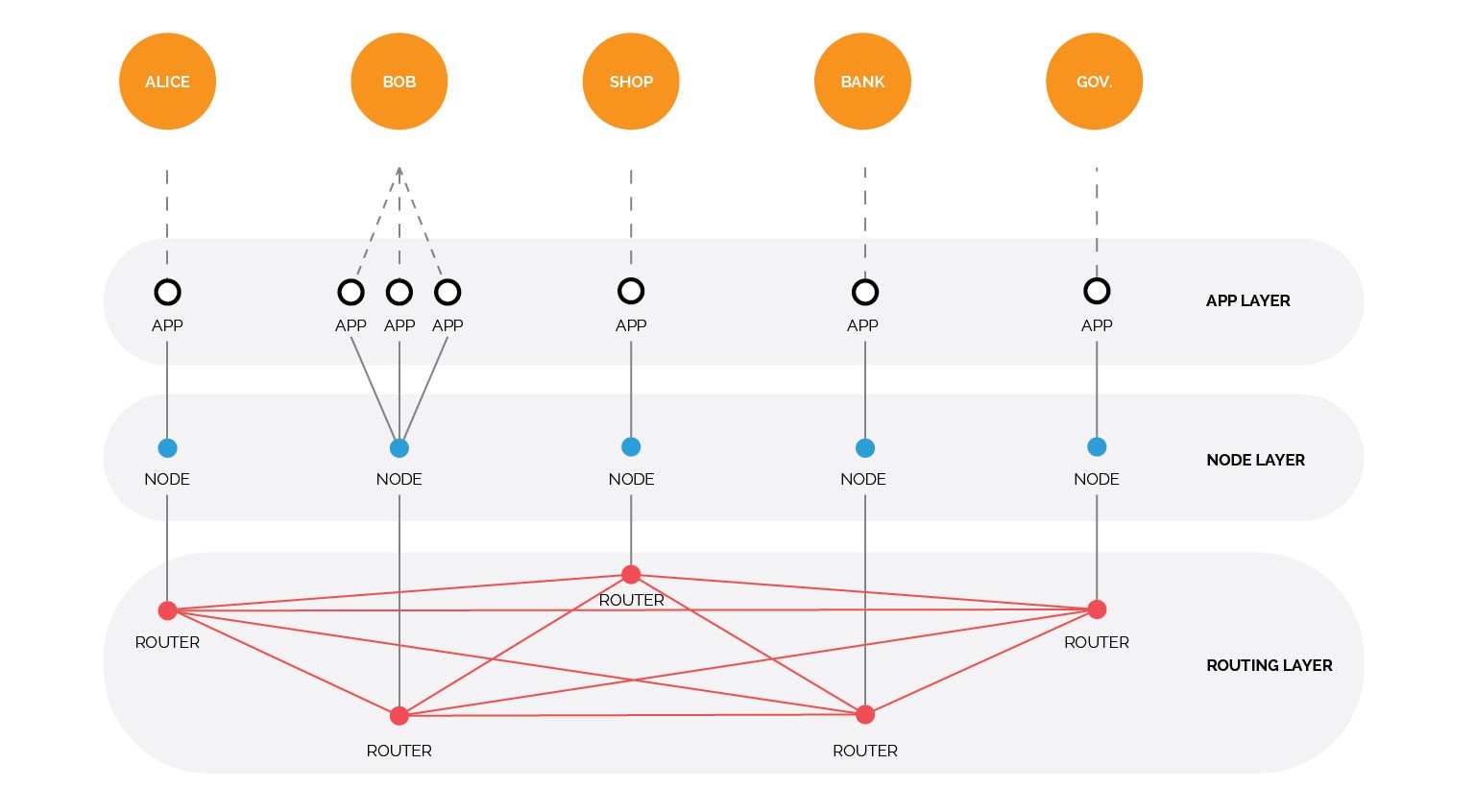 Each layer provides services to the next-higher layer and shields the upper layer from the details of how the services below it are actually implemented. At the same time, each entity in a layer appears to be in direct communication with other entities.

In designing and developing the Qiy Scheme, privacy by design is default. This refers to both a user’s ability to control how their personal data is shared and used, and to mechanisms that inhibit their actions at multiple participants from being inappropriately correlated.

The Qiy Scheme Standard has a number of mechanisms that support deployment in privacy:
• The Qiy Scheme Standard requires an indirect routing strategy. When a Node sends a message to another Node, that message is send to the Router the sending Node is registered at. The receiving Router forwards the message to the Router the destination Node is registered at. Routing tables hold only information to forward to the next hop
• The Qiy Standard supports the establishment of pseudonyms established between an individual and other users (Relying Party and Data Provider). Such pseudonyms do not themselves enable inappropriate correlation between Relying Parties and Data Providers (as would be possible if the node asserted the same identifier for a user to every other user, a so-called global address)
• The Qiy Standard supports one-time or transient identifiers – such identifiers ensure that every time a certain individual establishes a connector with a given Relying Party or Data Provider, that party will be unable to recognize them as the same individual that might have previously visited them (based solely on the identifier, correlation may be possible through non-Qiy data).

Security in the Qiy Scheme

The Qiy Standard defines a number of security mechanisms to detect and protect against such attacks.
▪ The primary mechanism is for the individual and the Data Provider and Relying Party to have a pre-existing trust relationship which typically relies on a Cryptographic Key exchange
▪ All communication between a Node and a Router and between Routers use the TLS protocol
▪ To prevent old communications to be reused in replay attacks, use of nonces is recommended
▪ Communication between nodes is encrypted using symmetric encryption.
▪ During the connection negotiation all messages between a Node and a Router and between Routers are digitally signed to ensure that the content of the message cannot be altered during this stage.

The following topics have been enhanced in Version 2.1 of the Qiy Scheme Architecture:
▪ The (technical) networked model has been clarified as an important design consideration for the architecture of the Qiy Trust Framework. Important requirements are:
• Prevent a market dominance by just one Scheme Participant providing the Qiy Trust Framework;
▪ The Qiy Scheme standard allows multiple Routing Parties to interoperate, thus allowing the entire market to benefit of shared positive network externalities
▪ The basic protocol data unit in Qiy is not a connection (which simply provides the transport for point-to-point communication) but a Qiy message, which is essentially data or a fragment of data that is sent over a connection. After two Qiy Nodes have completed the connection negotiation, either party can send messages. A message contains the following parts:
• Connection information
• Consent information
• Application Data
▪ General consistency and flow of the Qiy Scheme Standard

The target audience for the Qiy Scheme Standard consists of:
▪ IT executives
▪ IT process analysts
▪ Architects tasked with “business of IT” questions
▪ Development and operations managers
▪ Business developers, consultants and advisers

The Qiy Scheme offers a solution for the growing fragmentation of one’s collection of personal data. This is done by organising trusted access to all one’s sources of personal data within government, businesses and own repositories for use (on an active consent basis) within organisations the individual is dealing with. For public and private organisations this solves many problems in the field of data collection, data quality, digital identity etc.

While existing frameworks and standards have placed their main emphasis on connecting applications to people’s data by using countless API’s for every connection between every app and every data source, the Qiy Scheme is focused on solving the many-to-many problem by offering the tools for collaboration between competing parties in the personal data arena
and the open standard for the exchange of data under control of the individual.

For further details on the Qiy Scheme Standard, visit www.qiyfoundation.org/qiy-scheme/