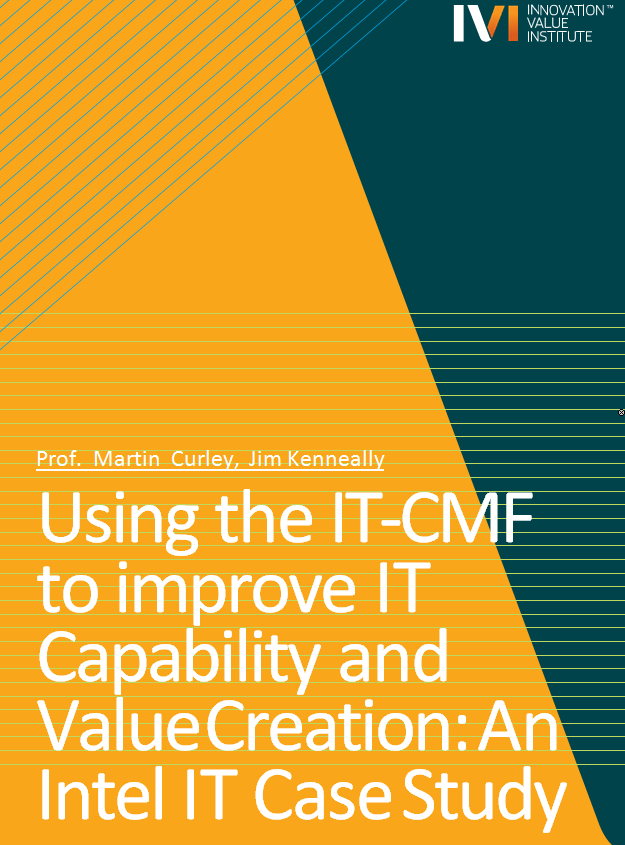 Using the IT-CMF to improve

IT Capability and Value Creation: An Intel IT Case Study

This case study describes how IT Capability Maturity Framework  (IT-CMF)  was used between 2007-2009  to help Intel IT navigate and track progress on IT capability improvement and value contribution from IT, whilst negotiating a strategic transition for the IT organization which involved significant downsizing and budget reduction.

The case study illustrates how the IT-CMF was used to measure capability improvements and provide intelligence on prioritizing improvement recommendations. The paper also discusses how practices contained within the IT-CMF helped articulate a business value improvement whilst more traditional metrics of IT  performance may have not have represented. Many people have argued that IT as a profession is like the cobblers children who have no shoes (Curley,

2004)[1] (Betz, 2006) [2] in that IT serves the business well in terms of using IT for business transformation whilst it is poor in using IT to manage itself. CIOs are continually faced with challenges such as cost reduction pressure, the need to demonstrate continuing value, increased complexity, need for better agility, mounting security threats and so on. In this context CIOs have to deliver  service excellence, support usage excellence and innovate all at the same time. Without a common framework or management practice body of knowledge (BoK) each CIO effectively has to devise their own solutions. This paper briefly reviews the IT Capability Maturity Framework™  (IT-CMF™)  (Curley  2007, 2008)[3, 4], Curley and Kenneally (2009, 2010)[4] whose development was originally spearheaded by Intel.

The goal of the IT-CMF is to help provide a generally reusable solution to this commonly recurring problem of having to manage many conflicting  challenges.

The IT CMF can provide a way to help manage and solve the previously described complex and Each CC refers to a specific set of integrated activities – leveraging behaviour, actions, methods and metrics in order to deliver specific outcomes  in support of value creation. Critical capabilities (CCs) can be utilized to improve the maturity states and the overall IT capability of the  organization. Intel helped drive the development of the IT-CMF  as our expected benefits included an integrated  and holistic approach to IT management developed by an industry led consortium, standardised assessment  tools,  benchmarking capabilities and opportunities for sharing of best practices for defining improvement  roadmaps.

Intel IT Organization – Case Study Context In 2006 the Intel CEO Paul Otellini introduced a new strategic initiative called SET (Structure and Efficiency Teams) with a goal of efficiency and taking $2–3  billion out of Intel costs to improve Intel’s bottom line. Intel IT was one of the first organizations to align and embrace this strategy; and the CIO introduced early redeployments and cost reductions to deliver IT’s share of this overall cost reduction goal. In response to the corporate SET initiative, Intel IT was one of the first organizations to introduce cost reductions. Given the people intensity of IT organizations, it was inevitable that there was a significant reduction in IT personnel with a total reduction of circa 24% from 7,500 to 5,700 IT employees, between 2006 and 2008 inclusive. In parallel the total IT Budget and IT Budget as a percentage of revenue were decreased as shown in Figure 1. 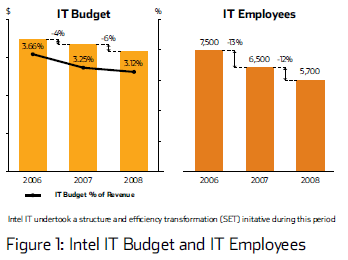 A  baseline  IT  capability  assessment  in  2007 showed that many of the Intel IT critical capabilities had low maturity – not unexpected following a major organizational restructuring effort. The assessment report in 2007 recommended a   number of critical capabilities which should be prioritized for improvement (centred on alignment, financial management and enterprise architecture) and appropriate improvement efforts were put in place such as deployment of a new IT Governance methodology. It is important to note that  the

IT-CMF was used in conjunction with several other frameworks including an enterprise capability framework which was developed internally to measure Intel’s internal business  capability. When the IT-CMF assessment was repeated in 2008  significant  improvement  was  reported, in part achieved through the execution of improvement efforts identified the prior year. The 2008 assessment also provided recommendations for which critical capabilities  to focus improvement efforts on in the following year. In 2008 – enterprise architecture continued to be focus area as well as a new area User Experience Design as Intel IT realized that focusing on service excellence was not enough and that only through outstanding usage of solutions could maximum value be  unleashed. In the years from 2007 to 2009 the IT-CMF assessment reported an overall 25% capability improvement as shown in Figure 2 below.

Remember this capability improvement was recorded against a backdrop of a headcount reduction of 1,800 people in IT and a budget reduction of circa 10%. Using the IT-CMF to  measure capability during this period, Figure 1 shows the year on year improvement achieved in each critical capability as well as highlighting key initiatives which were used to drive improvement.  It is important to mention that the IT-CMF was just one of the tools used to help focus IT improvement efforts and in this capacity it provided ‘business intelligence’ on IT capability maturity for the  CIO. 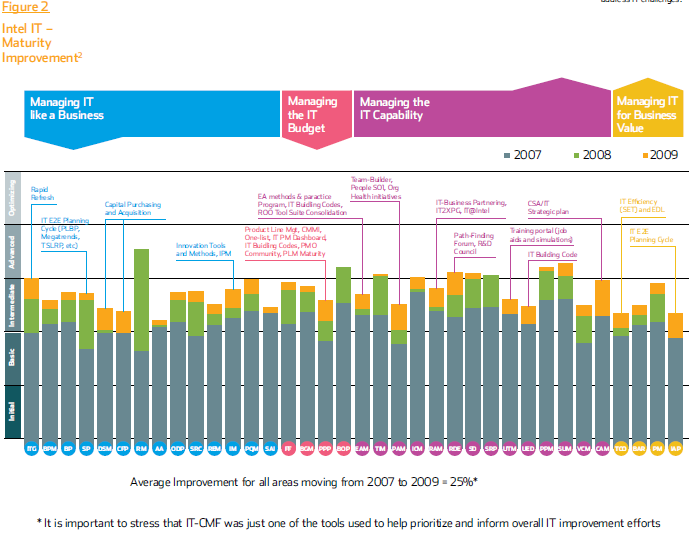 Targeting Improvement Prioritization At any IT organization there may be many   ‘fires’ which need to be fought, however the CIO and his leadership team must understand which are the priority fires which if improved will move the needle for overall capability improvement. The IT-CMF acts as a lens for portfolio improvement to clearly identify which areas should be considered for improvement.

Figure 3 displays a heat map to visualize critical capability importance relative to their maturity. An organization may wish to target critical capabilities that are deep in the red zones i.e. targeting imbalances between importance and maturity – moving them closer to green zone or at least into yellow zones. For critical capabilities (CCs) that are perceived relatively basic in importance, a comparatively basic level of maturity may  be appropriate, conversely for CCs that are considered more important, an advanced level of maturity may be required i.e. in each of these two contexts, an organization seeks approximate parity between CC importance and maturity. Problems may arise when there is an imbalance between importance and maturity – as graphically illustrated in the Figure 3 by the red zones, over-investing in mature CCs of low importance resulting in low ROI or under-investing in immature CCs of high- importance leading to possible risk exposure. This analysis was utilized as a summary health- check by Intel IT to illustrate approximate parity of CCs. In 2007 Intel IT’s maturity  profile was anything but healthy with exactly half of the Intel IT critical capabilities being   in the red zone, where they were considered of high importance but low maturity. The   IT- CMF assessment in 2007 provided prioritized recommendations  for  improving  capabilities such as IT strategic planning, IT Governance and Enterprise Architecture. This analysis profile was carried out in subsequent years – and  results of which are discussed in the next  section.

Over the course of the following year focused improvement work was carried and the 2008 IT-CMF assessment showed an improved capability maturity profile. The 2008 IT-CMF recommended new areas for prioritized improvement such as resource management –  a resource management system was developed and implemented leading to better resource allocation and improved resource utilization. By the time of the 2009 assessment there was much healthier capability maturity profile with just one capability being in a red state – refer to Figure  3. 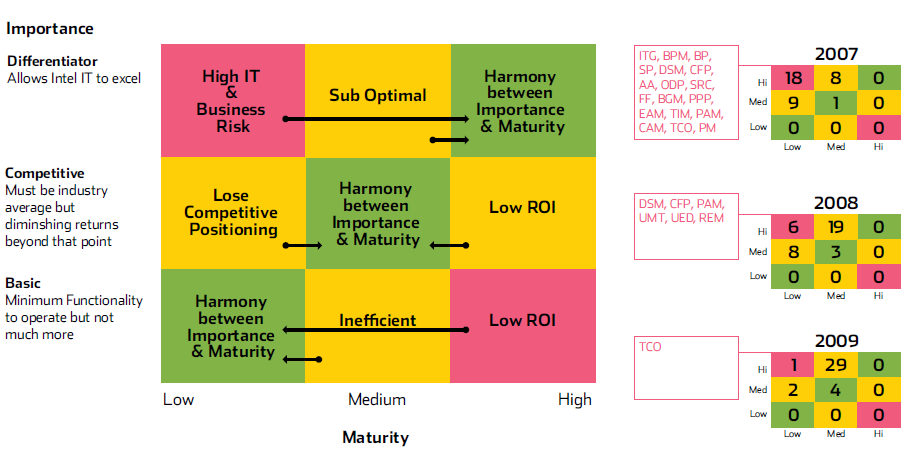 and fire fighting. Whilst there was still some imbalance between the maturity and importance of Intel IT’s critical capabilities, as indicated by  the number of capabilities in a yellow state, i.e. high importance and medium maturity, it is   clear that by 2009 Intel IT’s capability maturity had stabilized significantly and this created  the opportunity for Intel IT to become a more proactive IT organization, beginning to shift strategic focus   to boosting business capability while  continuing to maintaining or improve IT capability. Looking forward, the 2009 Intel IT assessment recommended focused improvement efforts in five  areas,  Business  Planning  (BP), Enterprise

Architecture Management (EAM), User Experience Design (UED), Services Provisioning (SRP) and Relationship Assessment Management (RAM). These areas were recommended for improvement following a review of the mapping between the gap between desired and actual maturity and rated importance of each critical capability i.e.by analysing the Importance Vs  Maturity  Gap.

This represented an evolution on the previously discussed analysis lens (Importance Vs Current Maturity) as many CCs had stabilized significantly over a number of time periods, a more acute analysis was considered to inform future CC selections for maturity improvement intervention. Figure 4 illustrates that the top-right quadrant should be the initial focus area i.e. those critical capabilities that are the most important and

have the largest maturity gap (i.e. between current and future). Overlaying the organizational objectives may create dependencies across certain critical capabilities or neutralize them.

those already planned. Another area, User Management and Training was not specifically prioritized for improvement as the focus for improvement was on User Experience  Design. 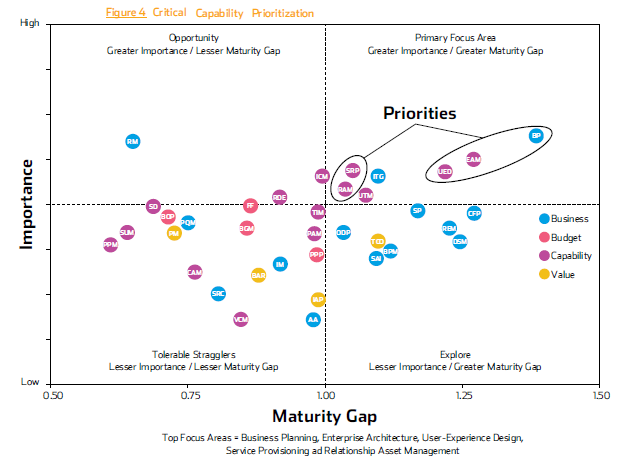 IT have used for Managing IT for Business Value have been described in several publications including (Curley, 2004)[1]; (Sward, 2007)[6]; (Curley & Kenneally, 2007)[7]. These practices enabled Intel IT first measure the  business value contribution of IT and then improve it. In particular Curley and Kenneally (2007)[7] describe ‘future yield’ as a measure of yield and indeed conversion effectiveness of IT. Future Yield is the future business value generated by IT, divided by the current budget of IT. (Not all CFOs may find this a useful measure, and indeed many

IT organizations may not be in a position to reliably calculate the future value contribution of IT). Intel IT’s experience in setting up an IT Business Value Program and then inculcating key business value practices into standard ‘modus operandi’ meant that this was a meaningful measure of IT’s conversion effectiveness or ability to convert IT budget into future value. Of course it should be recognized that much of the value that comes from IT spend is in keeping the business running.

Figure 5 shows that both IT effectiveness and value contribution improved. A key efficiency and effectiveness indicator includes the contact resolution rate for employee calls achieved by Intel’s technical assistance centres. Despite the significant headcount and budget reduction, the contact resolution rate was improved and more significantly the cost per incident was reduced by more than 30% over the case study period. This reduction in cost per incident was a combination of several factors including improved processes and productivity in the technical assistance centres including the usage of more self-help approaches (Baldwin and Curley, 2007)[8]. The net result was improved business value capability and improved service. 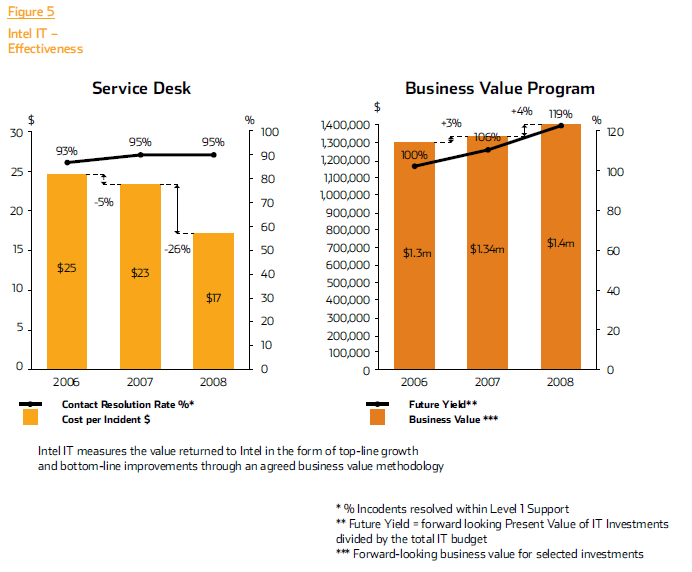 Despite the headcount and budget reduction and the elimination of many lower value addingactivities, Intel IT continued to operate its business value measurement area which by this time was an integral part of the IT finance processes for all large projects. Figure 5 shows that the new business  value contribution grew to $1,400,000 and the IT yield grew to 119% by 2008 – being a function of increased business value and lower IT  budget.

A measure of IT efficiency can be gauged from looking at an IT efficiency index and the data shown in the chart below. As shown in Figure6 despite reduced headcount and budget, the volume of key services supported grew, in part supported by leveraging Moore’s law and in part by continued improvement in Intel IT.

In conjunction with the previous performance data, a value assessment instrument (Ross and Weill, 2006)[9] was utilized. It evaluates the importance of four particular goals and IT’s influence on the following key  variables

/// Cost Effective Use of IT 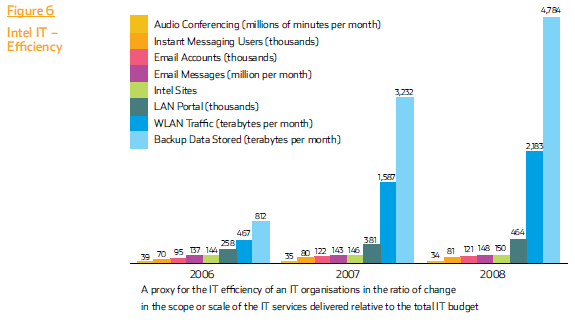 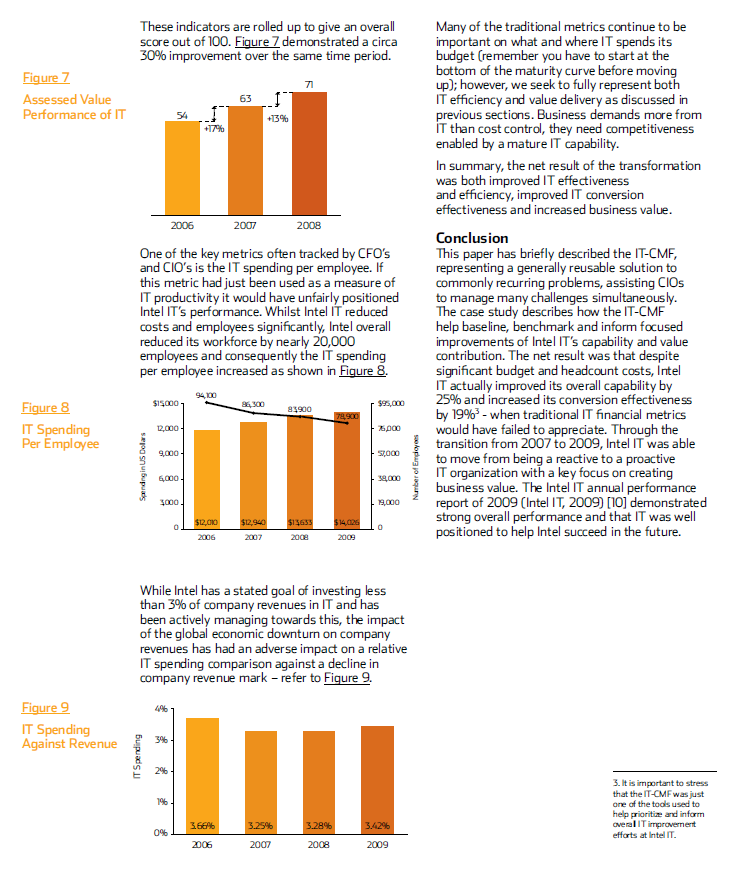 development and deployment of the IT-CMF at Intel. Also, thanks are due to Intel IT’s Chris Peters and Ilene Aginsky for their review of the original paper[11], of which this paper summarises.